I think it’s very clear that when high-status people do things, the rest of us start doing those things as well. When celebrities wear ripped jeans everyone else does the same thing. This is something we’ve known for a while. Have you ever thought why do high-status people start wearing ripped jeans or eating potato chips with caviar? Is it random that some of these things catch on to us, or might we be able to predict where these things come from and then predict the next big hit?

Here, we will talk about few branding strategies used in the market related to this. This will be all about what we call it as “Brand Mix” when something low end is mixed up with high end.

Have you heard about “trickledown effect”? Let me tell you with an example.

Do you know that the signature moves of “Bala-Bala” song in the movie where Akshay Kumar was a lead actor or that style of wearing ripped jeans by other high-end celebrities in many fashion shows?? You will also remember that it was followed by many mainstream folks as well for fun purposes. This is what the trickle-down effect is & a traditional “trickle-down” view of marketing, which suggests that goods move from high-end consumers to the middle market and the mainstream.

But have you seen the opposite connotation of it?

Traditionally lower-status groups or traditionally marginalized groups might start doing something, then the middle-status people do it, and eventually the high-status people do it. That’s exactly the opposite of trickle down which is called as “trickle round effect” in the new era of marketing whereby status signals move directly from low-end to high-end before diffusing to the middle.

This happens when low is mixed with high & it becomes a popular product or services given by anyone around the corner.

But do you know what is the use of these new marketing strategies for brands? Why does it matter to them?

A lot of brands have been toying with this idea of borrowing signals from other strata. There are many strategies or many paths brands could take. And as long as you’re doing a good job of activating or implementing that path, you’re going to be successful. One example would be Target launching a clothing collection with high-end fashion house Missoni. The partnership between Missoni & Target can be called as a strategic partnership where both can earn more revenues as moving down-market is a great way to boost revenues in the short term even when the target segments of both are different in nature as Missoni has high-end positioning in comparison to Target which sells more to the mainstream. But what do you think how they are going to do this? Is it only for profits & revenue from both sides? 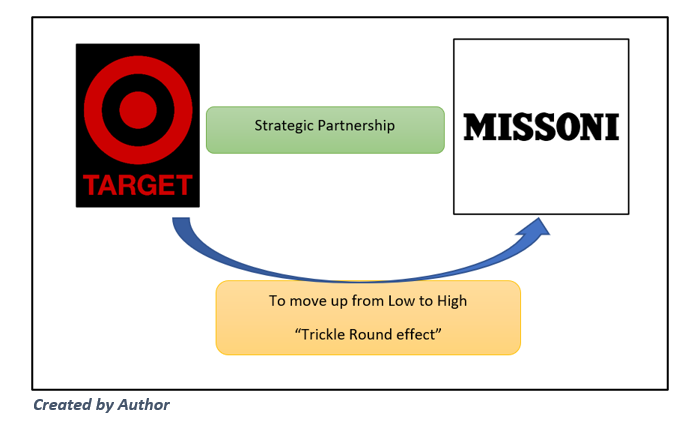 It is clear why Target wants to partner with a high-end brand. It definitely benefits Target but it moves Target a little bit up in the status hierarchy. It can also be beneficial for those high-end brands because they sell more. Target wanted to move up the status hierarchy, that is why being at the lower end they managed to partner with Missoni. This is what the trickle round effect is which expands the brand equity in the market by following these strategies. It’s a huge push for these brands to mix their lower positioning with high in order to move up in the market. Now, it’s not Limited to the positioning these mixings can be done to a product as well.

What is generally seen that highs only borrow from traditionally marginalized groups when there’s that ability to mix and match. If the pick & choose went wrong then it could be a serious disaster for a brand as they won’t be able to resonate their ideas what they thought could have been popular. Pick something traditionally high and mix it with something more traditionally low are successful in nature when the matching or mixing is correct.

Let me give you an example of “Wrong Mixing” failure. Suppose you are happy because you got a reward for your work  because of someone who helped you in doing some work  & you want to celebrate by sending him cologne[Ingredient  of perfume] that’s actually in a spray-cleaner bottle. It’s a very high-end cologne — probably it costs you about 70000 bucks or maybe even more expensive than that. But it’s in this bottle that looks like Windex.

[*Note: – Windex is a glass & hard surface cleaner sold under the brand name of Johnson].

This kind of mixing is not substantially good because to mix with low end is perfectly fine but it should exemplify & amplify story of the product & if it’s not there, it can’t be popular any more.

Hope this has enlightened your mind & given you new learning perspectives for the brand. We will go deeper in this as well by bringing more facts on how Indian brands are leveraging through mixing in upcoming articles. Till then, happy learning!