Think of all the possible types of videos you have come across, and think about their aspect ratios. Now remember all those apps which take permission from you to take pictures and shoot videos.

Done? Thought of them?

Now think what do all of these apps have in common?

Go on. Think some more…

The thing we are talking here about is vertical video.

It is basically a video shot in the 9:16 aspect ratio, which means it fits the size of the normal average smartphone. They have a lot of mobile real estate on their hands to include text, graphics and interactive content. Come on! They get the full screen.

Traditionally, horizontal viewing and video making has been the norm, until about 8 years ago – when vertical video first came up. It received a lot of backlash, being assumed as originating due to lack of creativity from the content creator, and termed as a fad.

But wait! We are in 2020, and anything can happen here (if you get the meaning).

Have you ever come across a relatable video or a video ad, but to see it you have to tilt your device horizontally – sometimes leading you to ultimately discard you from watching the video? Rotating the device horizontally to watch it acts as a dampener, right?

If yes, then well precisely that is the reason why vertical videos are seen as an emerging trend today. I mean, don’t we all want a seamless viewing experience? An experience which does not shift the boundaries of our comfort?

It all starts with the mobile devices. They are oriented vertically by birth. And even if we do an ‘auto-rotate’ of our screens sometimes, users hold their smartphones 94% of the times vertically (according to Breadnbeyond). Now since mobile consumption is increasing (more than 75% of worldwide viewing, 65% of total digital usage), mobile ads & mobile-first ads are also increasing. Hence the vertical videos. You get the chronology?

Now we come to the point to know why is it becoming an upcoming trend?

Vertical video ads are completed 90% of the times, while the completion rate for horizontal ads stand at a mere 14%, according to studies. Well. Just imagine. For a video shot in landscape (horizontal) mode, you need to turn around the phone. If you don’t want to do it, you’ll have to be content with watching the video among a barrage of black space – distraction. You won’t focus on the brand & the product with it for sure.

Vertical videos get their user experience right, ‘seamless’ is the right word for it – even allowing for some native advertising. They up the engagement levels, & allow for a quick conversion. New music directors, artists & influencers are getting an open door to their audience via the vertical video – courtesy the social media platforms. The hashtags trend when celebrities come up for a live session.

This gets me to the social media platforms. 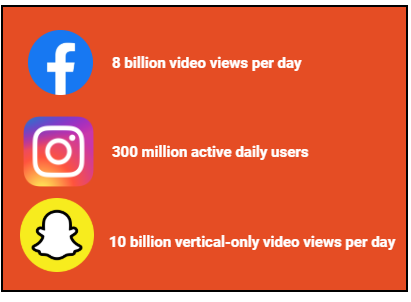 This video trend was popularized (and pioneered) by Snapchat when they launched in 2011. They encouraged advertisers to come up with vertical ads (Snap Ads). The company shared that its vertical video ads were viewed till the end nine times more than horizontal ones.

The idea behind Instagram’s IGTV was to create a platform for long-form videos that are created “in a vertical format that sit upright in the palm of your hand.” The existence of IGTV and TikTok is solely dependent on vertical videos. Instagram Stories merged the video concept with the one which allowed for self-destruction of user stories after one day. 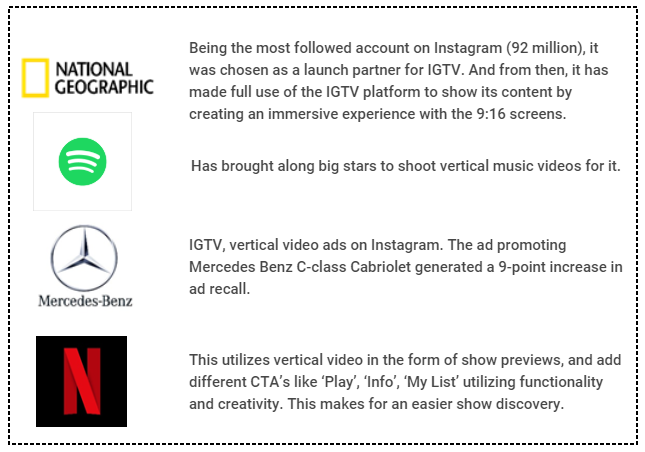 To take the example of Netflix further, check out the picture. Here these are previews with a duration of 30 seconds, fitted in the portrait aspect ratio. It has CTA’s of ‘My List‘, ‘Play‘, and ‘Info‘ about their product (TV Series).

So, the next time you see a puppy playing with his friends, and you feel the need to create a video – open up your camera, shoot a video in the portrait (9:16) mode, and be among many who love vertical videos.

One thought on “The talk about ‘Vertical Video’.”