Have you come across Virat Kohli’s new Instagram post where he is grooming his beard live by a Philips trimmer? Such posts in times when the internet usage has seen a surge is not a coincidence, it is a strategy.

In the middle of the lockdown, Virat Kohli on Instagram subtly ran a campaign where he urged his fans to stay well-groomed & try new looks using Philips products. Not only celebrities but millennials and Gen Zers with only a few thousand to millions of social followers are actively involved in these platforms branding a product.

As social media platforms are flourishing, how are the brands trying to stay relevant? The stupendous growth has forced the advertising industry to change and adapt to continue to reach consumers. Even today, the COVID-19 pandemic continues to affect every aspect of our lives, especially the traditional part of advertisements. Therefore, today in this uncertain world & with people spending more time on media platforms, influencer marketing is seen as a hope for brands & looked upon as a savior of marketing.

So, who is an Influencer in Today’s time?

An influencer is someone who has the power of swaying the purchasing decision of others because of their area of expertise and popularity. Those influencers essentially spread the virtual word of mouth, and most of the consumers perceive it positively and reacts to a message that comes from a trusted friend or an influencer. The major type of brand influencers are mentioned below:

To select an appropriate influencer, there are few criteria that one should fulfill so that the objectives or goal set should be achieved. Therefore, the judgement criterion schematic diagram is given below: 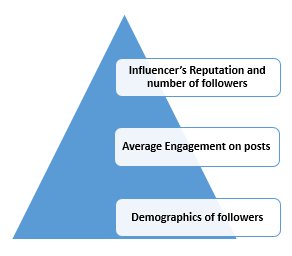 How do influencers help to build a brand equity?

Well, the world has changed quite a lot recently in terms of marketing. The marketing methods that used to be popular like traditional marketing on  TV and prints don’t work that well anymore because people don’t spend much time on those media, instead the dominance of social media like Instagram, Facebook, YouTube & TikTok – once the champion of influencer marketing in India with millions of brand-sponsored posts put by influencers, but later was banned in the nation.

When a celebrity or an artist confesses its love for Taaza tea (Wah! Taj) on social platforms & one of your friends tweets an image with their Starbucks cappuccino, both are the examples of influencer marketing. The question here is whom do you relate more to?

As per the researches:

Examples of brand Activation by Influencers 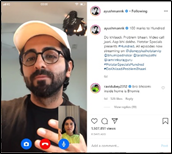 Actor Ayushmann Khurana, who is known for his shayaris, was seen doing a live chat on Instagram in a similar style about an upcoming show on Hotstar with actress Bhumi Pednekar, who is known for her straightforward attitude, where she is seen saying “It seems, Hotstar has paid you pretty well and that’s why you are recommending”. These celebrities, who have more than 11 million followers, indeed created a buzz about the show with their wit.

However, an influencer need not be just a celebrity. Anyone who has a good number of followers or has excelled in a niche where people look up to him can be a follower. It can be a popular animal photographer on Instagram, or a well-read home décor blogger who tweets, or a respected marketing executive on LinkedIn.

Similarly, 26-year-old YouTuber, Ashna Shroff has over 176k followers & is seen in DIY videos using beauty products of various brands like Corioliss, Kew Gardens, BBlunt along with fashion products of Lifestyle and Westside, influencing her followers.

Many social media influencers have also used this platform for raising awareness about social issues like gender equality, women safety, LGBT rights, and animal rights. One such influencer is Vivek Shraya, an artist who has recognition in the field of music, literature, visual art, theatre, and film. Through his Facebook posts, he aims to educate and inspire about topics including mental health, queerness, and inclusion, which helps in creating an open-minded culture in society.

Today, analytics is also used to map the defined variables & models to find out the effectiveness of the campaigns. If the company’s goal is more visibility, the metric will be the number of new potential customers who became aware of the brand through the campaign & if the company decides to increase engagement then a valuable metric is the cost-per-engagement (CPE).

While a trend of YouTube v/s TikTok was doing the rounds, no matter which platform wins, the winners are always the brands which have gained visibility and shares through influencers. Influencer marketing works because it is nothing more than a natural social interaction and the credibility and genuine authority are established in the minds of the audience. The best trick here is the absence of a trick. More and more businesses are reaping benefits of it, making it one of the most popular marketing techniques. We might be aware that it is a type of paid advertisement but still be more influenced rather than a star’s advertisement.

This article has been co-authored.

Priya A Saxena, MBA at Symbiosis Institute of Business Management. She is an engineer, though not by heart, soul, or even the mind. She enjoys managing things on some occasions, while messing them up at others. However, she believes that every mess up is a lesson & hopefully the mess ups will reduce & the achievements will increase with time. She is eager to pick up anything which is creative, challenging, & helps in increasing the skill level.