It all started with a promotional ad on YouTube.

The ad which was launched on December 12, 2016 tried to sell a Bahamian island fantasy – a luxury music festival giving the visitors and attendees an experience of a lifetime, to its audiences, but fell way short of it.

Before we take a marketing lesson out of it, let us delve deeper & look into what happened at Fyre – the festival which never happened.

Fyre – a talent-booking app owned by Fyre Media Inc, was an app which garnered the utmost attention of the audiences back in 2016.  Billy McFarland – the twenty-five-year-old CEO of Fyre Media Inc, who along with rapper Ja Rule came up with the idea of having a luxury music festival in Bahamas. The intent was to promote the talent-booking app which was used to book artists and music talent by corporate and the public alike.

The concept of the festival originated when McFarland and Rule went on a vacation to Bahamas, in October 2016, and they discovered an island which was lightly populated, later discovering it to be Norman’s Cay – once formerly owned by the drug lords of the Medellin cartel. The island was quickly leased by McFarland, with the strict condition that they should absolutely make no reference to Pablo Escobar in their marketing.

This was agreed upon. And the countdown was set. The makers promised “the best in food, art, music, and adventure” on “an island once owned by Pablo Escobar” – celebrity chefs giving exquisite cuisines from across the globe, accommodation in “modern, eco-friendly, and geodesic domes”, and “an immersive music festival”.

The Fyre ad campaign was centered around a group of influencers and some world-famous models enjoying a luxurious and an exotic weekend in the picturesque landscapes of the Bahamas. The ad featured influencers such as Kendall Jenner (getting paid a whopping $250000 for a single Instagram ad), Bella Hadid, Emily Ratajkowski & Hailey Baldwin. The promotional campaign of Fyre started on December 12, 2016 when influencers simultaneously posted on their Instagram feeds a video with a thumbnail of an orange square & a logo of ‘Fyre’ made with stylized frames.

Here is what the video promised. Heck – it is still there on YouTube. Check this out below.

“Two transformative weekends…on the boundaries of the impossible”

Here’s what actually happened when the visitors landed on the island. We’ll show you some tweets from the guests who were a part of this “immersive” experience.

With a promise of a custom, VIP-configured Boeing 737 from Miami to give a full VIP experience, guests waited for hours at the airport – no flights to take them out of the disaster. They ended up getting stranded at the airport.

The guests had to collect their luggage from a shipping container. No tags. No identification. In the dead of night. The ticket included gourmet food. But their “culinary experience” was turned to makeshift tents serving cheese sandwiches & salad. The band Blink-182 (their biggest promotion gimmick) backed out two days before the event due to lack of infrastructure. The promised accommodation (for villas) was made in disaster relief tents with dirty floors, soaked mattresses, making the venue more of a tent city, with some of the tents not being put up.

In addition to this, people rushed to grab their own share of tents. Not enough tents & beds for the guests were available, hence there came a time when the guests had to steal from others. There was no lighting on the dark island, a lack of medical personnel, portable toilets, no running water & security.

The festival which never took off had an effect – not just on the visitors and guests who had made a hefty payment, but also on the local communities, the government and the people of Bahamas. It left everyone scarred.

Fyre was over advertised, starting with the influencer ad – which created a misleading expectation in the minds of the consumer. It was also falsely advertising it’s service – they were asked not to use the name of Pablo Escobar, but they did that in their first ad itself (which also led to losing the Normans Cay).

They over committed on their promise, & hugely under delivered. The team also couldn’t gauge the impact of their advertising, and sold more than the capacity, more than they could manage.  For organizing a festival in the way that the makers had envisioned, it was practically impossible to develop it in a mere 4-5 months. In the end, they didn’t have the actual service ready – no tents, no villas, no coordination, and no festival.

With this understanding of Fyre, we can firmly say that the Fyre festival is a service – a perishable and an intangible item – meant to provide an “experience” to the attendees. Now, let me introduce you the concept of the gap model.

A gap arises whenever there is a difference between the designed product & actual result of the ‘experience’ given. A gap model involves two things:

We can say that the provider gap of the Fyre Festival should look somewhat like: 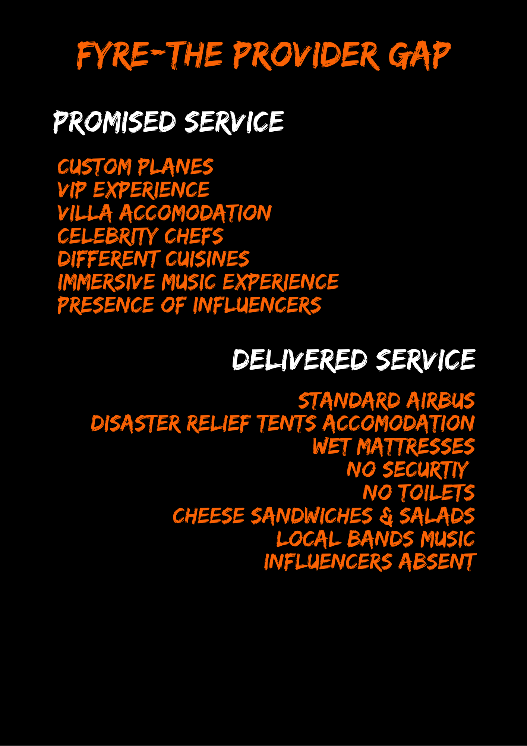 To fulfil the customer gap, it is very essential to fill in the provider gap. Only then will the customer expectations will be delivered, and the customer gap would be bridged. It is similar to saying that we should be 100% right from our end, before lodging a complaint.

Service marketers should understand the customer expectations of the service. It is a genuine and a given fact that when you spend millions of dollars on an Instagram advertisement – featuring the best locations, shot beautifully, and acted out by some of the best models and influencers, you are bound to have your expectations raised. But then, it is also the task of the service marketer to ensure that the customer and the provider gaps are bridged.

This brings me to the concept of zone of tolerance. There are two types of expectations:

Fyre festival is the perfect example of what happens when you don’t focus your time, money, and efforts on designing the service, but instead focus more on the marketing. When your marketing includes names such as Kendall Jenner and Bella Hadid, you create an “expectation” and a “perception” in the customer’s mind. You are bound to sell more and more tickets. When you have names such as Blink – 182 and Major Lazer, it is obvious to expect more and more people for the party.

But. One should never over commit through its communications, & under deliver on the expectations. The Fyre team was trying to sell an average American dream – which they failed completely & couldn’t deliver.

In the Netflix documentary, which also has been among the source materials for this article, a character (the part of the Fyre team) even accepts “The actual festival happened in that seven days of shooting for the ad.”